Watching new reports or reading the press would lead many people to believe that self harm was predominantly, if not exclusively an issue for young women. A quick Google search of news items for example, shows how this is presented, The top 3 items on such a search, performed 15-8-2016 were related to women 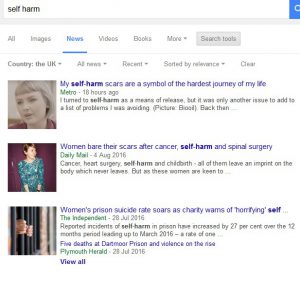 And it not just the press that are to blame. Government web sites as well as those for mental health charities also perpetuate the stereotypes, in the images they use. 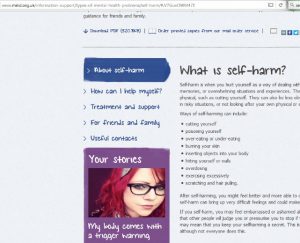 with Mind using an image of a young woman to illustrate its web site on self-harm. 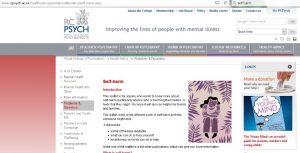 However the statistics do not seem to totally reflect this almost universal perception of people who self-harm being young and female.
If we look at the statistics produced by the South West Public Health Observatory we can see for the years 2001/2 to 2008/9 we see that Males and adult age groups make up a significant fraction of the total admission to hospital

Again we can see that adult self-harm forms a significant proportion of admissions.
In 2015/16 17% of admissions for self-harm were aged over 45 with 38% of them being males.
North, East & West Devon CCG for example shows a similar result 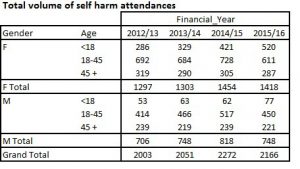 Obviously those attending hospital may not for a total representative sample so I identified different data set, those self-harming while in Prison. 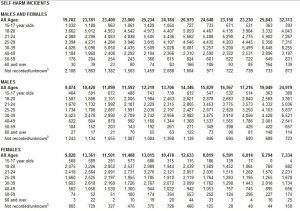 2004-2015
We can see from these figures that in 2015 77% Males in 2015 and that 13% of them were over 40. Obviously these figures are skewed but the relative numbers of males and female in custody, with males far outnumbering the females.
Looking at the relative prison populations:

We see that females make up 4.5%, a figure that has remained relatively static over the last few years
Applying this correction gives us a result that just over 13% of self-harm in the prison population was committed by males. This figure is significantly lower than that seen in hospital admission but still a significant number.
This may be explained by the differing nature of the prison population and regimes in place, but this would need further research to determine.

I think it fair to say that while the predominant population of Self-harmers are female and younger, late teens to late twenties the numbers of both male self-harmers and people in older age groups that self-harm are significant.
It would be nice to think that the media would reflect this divers population but that is, in all probability a forlorn hope. However it would be expected that the charities involved with people who self harm, as well as the NHS and other statutory services should recognise the range of genders and ages of the people who self harm in both their publicity, web sites and service provision.